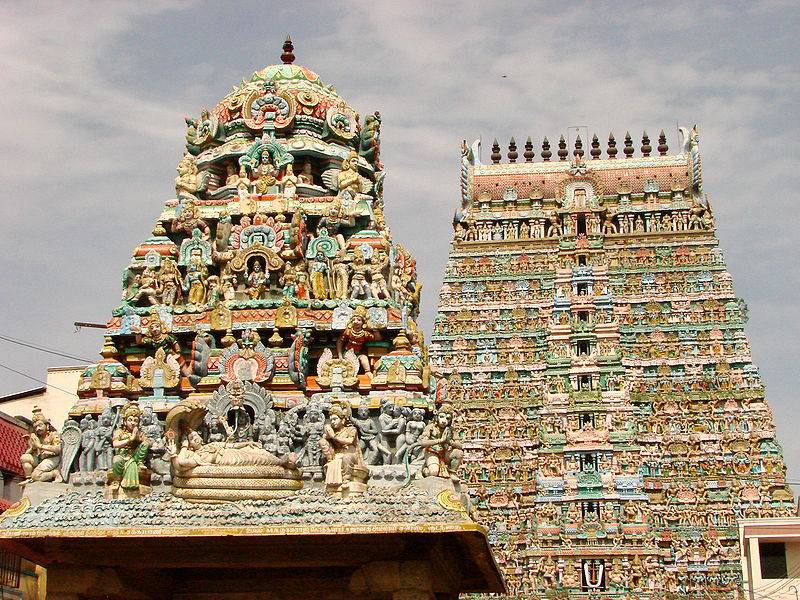 Sarangapani Temple is a Hindu temple dedicated to Vishnu, located in Kumbakonam, Tamil Nadu, India. It is one of the Divya Desams, the 108 temples of Vishnu revered in Nalayira Divya Prabandham by the 12 poet saints, or Alwars. This temple is along Kaveri and is one of the Pancharanga Kshetrams. The temple is believed to be of significant antiquity with contributions at different times from Medieval Cholas, Vijayanagar Empire and Madurai Nayaks. The temple is enshrined within a huge granite wall and the complex contains all the shrines and the water bodies of the temple. The rajagopuram (the main gateway) has eleven tiers and has a height of 173 ft (53 m). The Potramarai tank, the temple tank, is located opposite to the western entrance of the temple. Sarangapani is believed to have appeared for sage Hemarishi. The temple has six daily rituals at various times from 5:30 a.m. to 9 p.m., and twelve yearly festivals on its calendar. The temple chariot festival is the most prominent festival of the temple, celebrated during the Tamil month of Chittirai (March–April). The twin temple chariots are the third largest in Tamil Nadu, each weighing 300 t (660,000 lb). People pray to planet Kethu for excellence in education and family prosperity.Those facing some adverse aspects of this planet, pray first to Lord Naganatha Sarangapani is the largest Vishnu temple in Kumbakonam and has the tallest temple tower in the town. The temple is enshrined within a huge wall and the complex enshrines all the water bodies of the temple except the Potramarai tank. The rajagopuram (the main gateway) has eleven tiers and has a height of 173 ft (53 m). There are five other smaller gopurams in the temple. The rajagopuram has figures depicting various religious stories. The temple faces east and the Potramarai tank is located outside the western entrance. The central shrine of the temple is in the form of a chariot drawn by horses and elephants, with openings on either side, showing the descent of Sarangapani from heaven in the chariot. There is a sculptural representation of the sage Hemarishi in the western part of the temple. 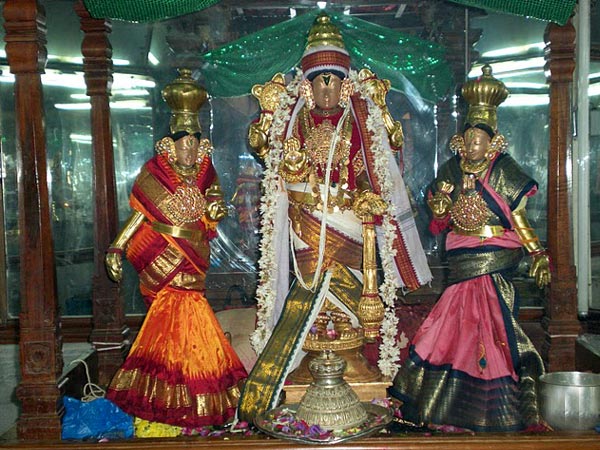 As per Hindu legend, the Vaishnava deity, Sarangapani, an incarnation of Hindu god Vishnu, appeared for a sage Hema Rishi, who performed penance in the bank of Potramarai tank.The penance was performed to obtain Lakshmi, the consort of Vishnu, as his daughter. Vishnu was pleased by the penance and he wished the sage to get Lakshmi as his daughter. Lakshmi emerged from the Potramarai tank among thousand lotuses and was thus named Komalavalli (the one who emerged from lotus). Vishnu descended to earth as Aravamudhan in a chariot drawn by horses and elephants from his abode Vaikuntam.He stayed in the nearby Someswaran Temple to convince Lakshmi to marry him and the couple eventually got married. The name Sarangapani ("one who has the bow in his hand") derives from the Sanskrit word Sarangam meaning bow of Vishnu and pani meaning hand.The temple follows Pancharatra Agama and Vadakalai tradition. The temple priests perform the puja (rituals) during festivals and on a daily basis. Like other Vishnu temples of Tamil Nadu, the priests belong to the Brahmin Vaishnavite sect, which is dedicated to Vishnu. The temple rituals are performed six times a day; Tiruvanandal at 8:00 a.m., Kala santhi at 9:00 a.m., Uchikalam at 12:30 p.m., Ntiyanusandhanam at 6:00 p.m., Irandamkalam at 7:30 p.m. and Ardha Jamam at 9:00 p.m.Each ritual comprises three steps: alangaram (decoration), neivethanam (food offering) and deepa aradanai (waving of lamps) for both Sarangapani and Thayar. The food offering during the six times are curd rice, Ven pongal, spiced rice, dosa, Ven pongal and sugar pongal respectively. The worship is held amidst music with nagaswaram (pipe instrument) and tavil (percussion instrument), religious instructions in the Vedas (sacred text) read by priests and prostration by worshippers in front of the temple mast. There are weekly, fortnightly and monthly rituals.

Lord Vishnu is the Supreme God of Vaishnavism. He is also known as Narayana and Hari. As one of the five primary forms of God in the Smarta tradition, he is conceived as "the Preserver or the Protector". Praying to Lord Vishnu with a full heart has beneficial effects. A puja at these three Lord Vishnu temples is considered extremely auspicious. In Hindu sacred texts, Vishnu is usually described as having the dark complexion of water-filled clouds and having four arms. He is depicted as a pale blue being, as are his incarnations Rama and Krishna. Sarangapani Temple is a part of the 108 Divya Desams. It is also one of the Pancharanga Kshetrams. The pillars in the Ramaswamy Temple hall near the gopuram are sculpted with exquisite finesse depicting various episodes of the epic Ramayana. In the Chakrapani Temple, Lord Vishnu appears in the form of a discus or Chakra to put down the pride of Surya, who subsequently became his devotee. Like Lord Shiva, Lord Chakrapani has a third eye on his forehead.